Star of the Year 2017 winners announced

C&I recently kick-started the summer by hosting our Star of the Year Awards, acknowledging and applauding the great and inspirational work of individuals, teams, service users, carers and volunteers at the Trust.

The afternoon was entertaining and moving in equal measure, with the winners' colleagues and nominators thrilled to see them getting the recognition they deserved. In addition, it was wonderful to have the Mayor of Camden, Cllr Richard Cotton, join us for the afternoon and handout the Lifetime Achievement Award.

Here are details of all of the winners. Congratulations to them and to all our fantastic runners-up.

"With Louis, you are not treated just as a service user, but also as a person. His great gift is he genuinely cares!" 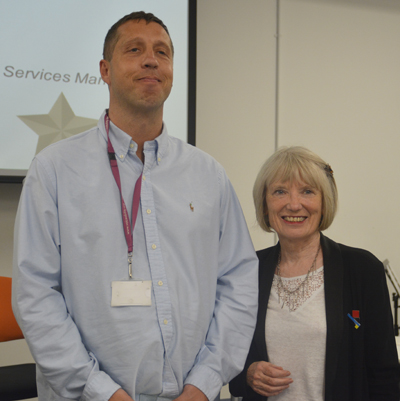 "Dean always demonstrates openness, honesty and empathy and is a fantastic role model and inspiration for other service users!"

Volunteer of the Year

"Dor has made an invaluable contribution to the Services for Ageing and Mental Health Division. Her energy, enthusiasm and commitment to helping the team is very impressive."

Picture: Dor was unfortunately not at the event but will receive her Volunteer of the Year award in the next few weeks

Carer of the Year

"Sally has been described as a hero of modern times! Her patience, courage and perseverance is remarkable."

Picture: Leisha presenting Sally with the Carer of the Year award

"Adele stands out as someone who can lead colleagues to create a more positive, dynamic and confident culture."

Frontline Service of the Year

"Islington iCope receives over 9,000 referrals each year and still manages to treat service users within the waiting time requirements. They consistently demonstrate great commitment to their role and to service users."

Picture: Colleagues from Islington iCope picked up many awards between them

Support Service Colleague of the Year

"William always makes an effort to talk to staff, service users and visitors, particularly if they are not feeling great. He leaves the ward very clean and takes pride in doing his job well."

"Clover has been dedicated and committed to the Nubian User Forum and without her, many African and Caribbean men and women would be at risk of poor mental health."

Picture: Patrick Vernon presented Clover with the Celebrating Diversity and Inclusion award, and she is here with him and her friend, Lincia Tuitt

"Mary consistently demonstrates high-levels of care, compassion and attentiveness, which truly has been invaluable. Many have described her as having a natural vocation for nursing."

"These colleagues demonstrated undeniable bravery and selflessness in the face of extreme danger. Without a doubt, their professionalism that day saved the lives of colleagues, service users and many others."

Team of the Year

"This team has made tremendous progress in improving and streamlining the CareNotes system for colleagues, which is now far more intuitive and reflects the working practices of C&I."

Picture: Angela McNab presented the CareNotes Team with the Team of the Year award

Individual of the Year

"Izzy is a pleasure to work with, as she always takes the wellbeing of colleagues into consideration. While completing tasks to a high-standard, she has introduced innovative projects, which have improved the recovery rates of many service users."

Picture: Angela McNab presented Izzy with her Individual of the Year award

Congratulations to all of our winners, finalists and nominees!

Switchboard and General Enquiries
Telephone: 020 3317 3500
In an emergency
In cases of a mental health emergency, please call our 24/7 crisis line on 0800 917 3333 or contact your usual community mental health team. Find out more about getting urgent help here.