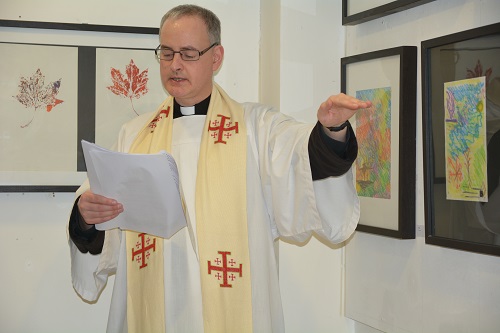 Revd Patrick Morrow shows the church is taking mental health seriously after being licensed as the chaplain of Highgate Mental Health Centre this week.

Patrick was licensed by Peter, the Bishop of Edmonton, who supervises the churches and chaplaincies across four boroughs in north London - Camden, Barnet, Enfield and Haringey.

He has been getting to know the patients at the centre in Islington over the past few months before being licensed as their Anglican Chaplain on 26 November.

He said, "I've been able to spend a serious amount of time with service users and that's been a real privilege and very rewarding. In due course I will be offering acts of worship, and God willing, also finding time to take patients to the local churches and community centres."

Patrick is delighted with his role and is looking forward spending more time with our patients.

He added, "I was delighted when this job came up. I do have another job - I work for an interfaith charity, the Council of Christians and Jews - which is great work but I have missed that direct pastoral one-to-one encounter. Before I was ordained I worked as a healthcare assistant in a forensic psychiatric hospital and I saw the job as very much being a pastoral role. I don't have medical skills but I can be a reassuring presence on wards."

Explaining the service, Peter said, "Every clergyman in the Church of England needs to have a licence to operate. That means that he has the churches' approval and they've gone through safeguarding procedures and ensured the person is suitable for the post that their being appointed. Father Patrick has a double loyalty to this NHS Trust but also to his Bishop."

Switchboard and General Enquiries
Telephone: 020 3317 3500
In an emergency
C&I has moved the service we normally offer in emergency departments to our 24-hour Mental Health Crisis Assessment Service, at St Pancras Hospital. The service will see people in need of urgent care so that they do not have to go to a hospital emergency department unless they have an urgent medical need. Emergency departments are under unprecedented pressure due to COVID-19 – the illness caused by coronavirus. We are urging people in mental health crisis to telephone our 24/7 crisis line on 0800 917 3333 or contact their usual community mental health team. If service users attend the 24-hour Mental Health Crisis Assessment Service in person we will see you but we urge you to contact the crisis line in advance for advice to ensure you are only leaving home when absolutely necessary.